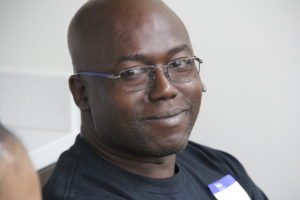 Herman Lindsey, Florida’s 23rd Exonerated Death Row Survivor and Board Member of Witness to Innocence, will tell his riveting account of being arrested, convicted, and sentenced to death for a crime he did not commit. Florida holds the shameful national record for the highest number of innocent people sent to Death Row – 27 and counting. No one knows how many innocent people have already been executed. By state statute, evidence is destroyed after an execution.

Innocent of all charges, Herman was shocked to the core. Not only was he falsely accused and wrongfully convicted, he was sentenced to DEATH. The state typically spends millions of dollars to prosecute and obtain a single conviction and death sentence. All too often, Florida prosecutors are more interested in “winning” the conviction and death sentence than seeking justice or finding the truth. Herman’s faith and the hard legal work to prove his innocence helped in his miraculous deliverance from the executioner.

The forgiveness and peace that Herman and many of his fellow exonerated Florida Death Row survivors have accomplished is impressive. As Herman says, “How can we ask to be forgiven, if we do not forgive others?” Florida’s Death Row exonerees are seldom, if ever, compensated by the state for their wrongful conviction and time in solitary confinement on Death Row. Herman received nothing, not even an apology. Many Death Row exonerees are compassionate and driven to abolish the death penalty. They recount their experiences as “dead men walking” and give witness to the reality of our state’s fatally-flawed, bloodthirsty, and wasteful death penalty program that ruthlessly kills people without mercy and no matter what the cost.