You are here: Home / Uncategorized / ACTION: Rally with us in Tallahassee

Place: The “Dolphin Fountain” area outside the West entrance of the Capitol Building and across from the Florida Supreme Court on Duval St.

Parking: Nearby parking may be available at the parking garage south of the Supreme Court Building and at Kleman Plaza

Buses will be arriving at 11AM from Orlando, Jacksonville, Tampa-St.Pete, Pensacola, and Miami-Dade. Some locations have multiple buses. Carpools from other locations are planned. 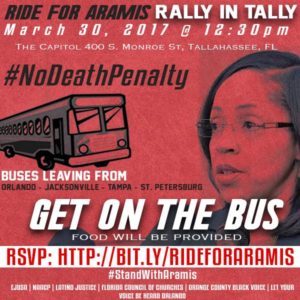 Help us spread the word about the Rally in Tally by sharing this image on Facebook.

Not only does trying to enforce the death penalty unnecessarily waste millions of taxpayer dollars over and above the cost of sentencing those same people to life in prison with no parole, it prolongs the judicial process for decades, forcing victim’s families to re-live the worst day of their lives over and over again.

Shockingly, Florida leads the nation with 26 people on death row exonerated and released due to evidence of wrongful convictions. Florida’s death penalty is rooted in racial bias – never in Florida’s history has a white person been executed for killing a black person. There is no proof that the death penalty prevents violent crime or protects law enforcement officers.

Last week, after an extensive and non-partisan investigation of the facts and reality of the death penalty process, State Attorney Aramis Ayala, elected on a platform of criminal justice reform, announced she would not seek death sentences in any cases in her jurisdiction. She acted very responsibly and within her rights as State Attorney. This was a big win for the safety and well-being of Orange and Osceola County families and all Florida taxpayers. However, Gov. Scott, an extreme proponent of the death penalty, abused his power and interfered in the lawful discretion and duties of the State Attorney and ultimately removed Ayala from an upcoming potential death penalty case.

That’s why we’re rallying in Tallahassee; to deliver a message to Gov. Scott’s office: Floridians are here to #StandWithAramis and to end the death penalty in our state.

Will you Rally in Tally with us?  We encourage you to bring friends, family, and carpool to Tallahassee. But if you don’t have a ride, there will be buses picking up participants in the following cities:

Register to attend and secure your spot on the bus today!