(Tuesday, October 22, 2019 FL Capitol) Five Death Row Exonerees delivered a letter to Florida Governor Ron DeSantis urging him to halt the execution of James Dailey and thoroughly review the new and substantial evidence that casts doubt on his conviction. (Update: Wednesday, October 23, a Federal Court Issued a temporary Stay of Execution for James Dailey until December 30) 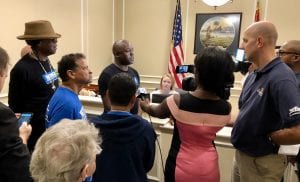 Four Death Row Exonerees of Witness to Innocence – Herman Lindsey, Juan Melendez, Clemente Aguirre, and Derrick Jamison, along with Seth Penalver, delivered the letter on behalf of four FL Death Row exonerees – Ron Wright, Joaquin Martinez, Juan Melendez, and Herman Lindsey. These gentlemen spent a total of 72 combined years under a sentence of Death for crimes they did not commit.
“The same types of evidence that led each of us to be exonerated are also present in James’ case. The only difference allowing us to be spared from execution while James is set to be killed, is whether or not a judge and jury has had the opportunity to review all the evidence.” Sample Media TV Coverage:
WCTV TV: Death row Exonerees ask governor to spare James Dailey

Your help is needed for the work to be done. Please support Florida Death Penalty abolition action campaigns to end the use of the Death Penalty.
Please post and share this message widely.

Mark Elliott
Executive Director
Floridians for Alternatives to the Death Penalty
www.fadp.org
FADP is a non-profit and non-partisan statewide Florida organization of individuals and groups united to abolish the Death Penalty in Florida