Florida Death Sentences on the Decline, Reach Lowest Level in 11 Years
Florida is One of Just Six States to Carry Out Executions in 2015

Tampa, FL — Florida is ending 2015 with just nine new death sentences–the lowest number of death verdicts since 2004. This is only the second time since 1977 that Florida has produced single digit death sentences.

According to the non-partisan Death Penalty Information Center, Florida returned a record of 45 new death sentences in 1991. Today, a new trend is clear as death sentences declined for the third straight year in a row. 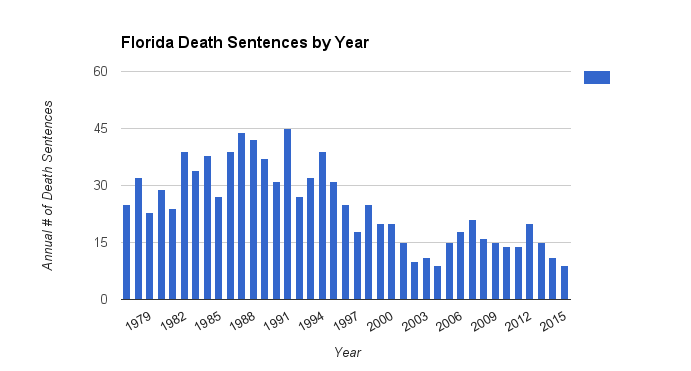 “The death penalty is circling the drain of history,” said Mark Elliott, Director of Floridians for Alternatives to the Death Penalty. “For decades, this failed government program has bled Florida taxpayers to the tune of a $1 million a week, sent at least 26 innocent people to death row while executing 91–almost one exoneration for every three executions–and diverted attention and funding away from solving Florida’s 14,000 unsolved homicides.“

“For a number of different reasons, the death penalty is dying nationwide,” said Prof. Stephen Harper of FIU Law’s Death Penalty Clinic, “Even in an outlier state like Florida, where all it takes is a 7-5 jury recommendation for a person to receive death, sentences continue a steady decline.”

“Florida is undergoing an obvious decline in the number of new sentences of death,” said Elliott. “Executions reflect public sentiment from 20 or 30 years ago when these sentences were handed out, while the current downward trend in death sentences reflects a growing unease and heightened awareness among today’s judges and juries in Florida.”

“It is time for Florida to recognize that the death penalty no longer deserves a place in our society because you can free an innocent man from prison, but you can never, never free an innocent man from the grave,” said Juan Melendez, who spent more than 17 years on Florida’s death row before being exonerated and released. “Florida’s death penalty is broken beyond repair.”

Floridians for Alternatives to the Death Penalty (FADP) is a coalition of individuals and organizations united to abolish the death penalty in Florida. For more information or to speak with a representative, contact Mark Elliott, Executive Director, at 727-215-9646 or mark@fadp.org or visit fadp.org.