The interview highlights the urgency of ending a violent and extreme punishment that denies humanity. We are better than this, and as Maria states so clearly, we will achieve abolition of the death penalty in Florida if we work together.

Please share it far and wide with everyone you know along with our petition. We must invite every Floridian who opposes the death penalty to join us.

If you can do more, please send this article to your state senator and representative. You can find them here. Please feel free to add your personal reasons for opposing the death penalty.

PS: We’re deeply grateful for your support. In the coming days, you will be getting our mid-year fundraising appeal. Please give whatever you can to bring about abolition as quickly as possible. Click here to donate. 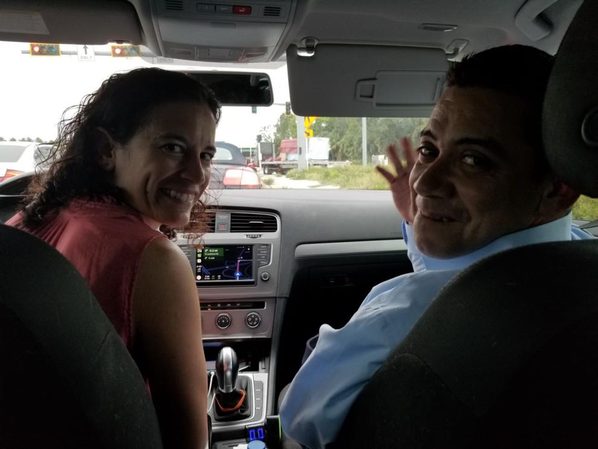 In the backseat of her car was Marie Parmer, her longtime partner and closest friend. Both women were exhausted after spending yet another long, grueling day inside the courtroom.

The front seat passenger was their client, Clemente Aguirre, who was eager to arrive home. DeLiberato was just as excited to take him there, because his homecoming almost a decade in the making.

Nine years prior to that drive, Aguirre was sentenced to death for the murders of two women, neither of which he committed. DeLiberato was part of a team of fellow appeals attorneys that took his case, and she put her heart and soul into proving his innocence.

On the drive home from the successful court appeal where his charges were dropped and Aguirre’s life was saved, DeLiberato exclaimed, “I can’t believe you are in my car!”

Those words of amazement and gratitiude were bourne out of the difficult appeals process. To her, that successful – and surreal — verdict felt more rewarding than any other victory she garnered before. From leading many appeals to flying to Aguirre’s home country of Honduras, there was nothing that DeLiberato wouldn’t do for him in hopes that he would one day walk free.

Today, DeLiberato serves as the new director of Floridians for Alternatives to the Death Penalty. She reminisced about that incredible day in her career with the Florida Catholic. The responsibility of appealing an innocent person’s case is a daunting of a responsibility when the choices are freedom or death. Yet, that responsibility is something DeLiberato, a longtime public defender, has held for more than 16 years. During that time, she has represented more than 35 death row inmates. As a lifelong Catholic, she has been vehemently opposed to the death penalty for as long as she could remember. To DeLiberato, people are more than the worst acts that they commit. Each and every person is a human being created under the image and likeness of God, and DeLiberato believes that no human deserves a punishment so inhumane as execution. She works to see the good in every person she meets, which motivates her to protect their lives with every move she makes.

“That’s not to take away from the pain that they’ve caused,” DeLiberato said. “But they’re more than that. They’re not monsters.”

DeLiberato knew that serving others in the court of law was her calling ever since she was 8 years old. While growing up in Harrisburg, Pennsylvania, she looked up to her father, a non-trial lawyer. She shared his dedication and passion for the law, but her strong heart and passion for justice influenced her to work toward becoming a defense attorney.

DeLiberato achieved her goal in 2006, moving to Tampa to join the Capital Collateral Regional Counsel. As a member, she represented clients who were sentenced to death in collateral proceedings. DeLiberato used that opportunity to form close bonds with every inmate she represented. To her, they were not just inmates, but people with lives, families and dreams. They deserved to retain their humanity despite what some of them had done.

Many of the people she represented as a member of the counsel were innocent, including Aguirre, which makes her work even more critical.

“(Clemente] is home in part because of the work that we were able to do,” DeLiberato said. “For me, that is my greatest achievement, and also my ongoing inspiration when I feel like I don’t want to do this anymore. A quick call to Clemente reminds me of what I have to do.”

But DeLiberato didn’t begin her career as a public defender. From 2003-2006, she served as assistant attorney in Miami-Dade State Attorney’s Office. As a prosecutor, she handled violent crime and sought justice for those who had lost their innocence and loved ones. But she remained firm in her opposition to the death penalty throughout those three years.

It wasn’t just her Catholic upbringing that fueled her stance. She had witnessed horribly-run death penalty cases, which cemented her stance. The State Attorney’s Office told her that prosecutors would not be forced to seek the death penalty, nor would they punish her for refusing.

“For me, I was like, ‘This is exactly how it should be,’” DeLiberato said. “It’s the law, and I can appreciate that, but (seeking the death penalty) was not something that I would have ever been able to do.”

But after three years, she left the prosecutor’s office to go the other side of the courtroom through the Capital Collateral Regional Counsel. After 13 years there, she moved as a public defender of the Sixth District Judicial Circuit of Florida in Clearwater.

In her almost two decades of judicial experience, DeLiberato has represented clients who she believed had been denied their humanity from an early age. Some clients endured horrible childhoods and lived experiences that prevented them from developing a proper conscience. They did not grow up witnessing love and kindness, but rather violence and heartbreak. Many grew up without a sense of empathy for others because no one gave them that empathy growing up.

While she said those experience do not excuse terrible actions many of them had committed, DeLiberato said they are also more complex than just their actions. She sought to be the voice for her clients and preserve their humanity, since nobody had ever given them voice before or fostered their humannity.

“You don’t end up on death row because you had a happy, privileged childhood,” DeLiberato said. “You just don’t.”

There had been clients of DeLiberato whose actions were truly evil. But she still confirmed they themselves were not, and sought to provide them with mercy, compassion and love — basic needs for all human beings — hoping they might personally reflect upon their actions and become better humans. DeLiberto said guilty clients are capable of change and healing from decades of trauma, and in doing so, they can find the inner peace and love that they’ve never known to search for. It won’t absolve their actions, but it will allow them to understand the severity of their crimes and give them a chance to become better people for themselves.

But under the death penalty, many don’t get that opportunity. By killing someone, they never get that chance to learn from mistakes. They will die without truly ever living.

On June 1, 2022, DeLiberato was named executive director of Floridians for Alternatives for the Death Penalty, an organization that mobilizes Floridians to fight for the end of capital punishment through legislation. It participates in grassroots campaigning and educating others on how damaging the death penalty truly is, in hopes that one day congresspeople will listen and understand that for themselves.

The organization works alongside families of homicide victims who do not support the death penalty, and listens and starts dialogue with the families who do. Members also meet with faith leaders who speak out against capital punishment, which includes a strong partnership with the Florida Conference of Catholic Bishops in Tallahassee. But above all else, the organization seeks to unify all people in support of their movement, regardless of political party, upbringing, or belief system.

To DeLiberato, redemption — not punishment — is the goal of the legal system, and true justice means abolishing the death penalty. She hopes to see its end from not just a moral point of view, but a legal one as well. But to achieve that goal, proponents must unite and fight to ensure that Florida’s most cruel punishment will never take another victim again.

“Talk to your family, your friends, your church members, your faith leaders,” DeLiberato said. “We can end the death penalty in Florida if we mobilize. I really, truly, deeply believe it.”