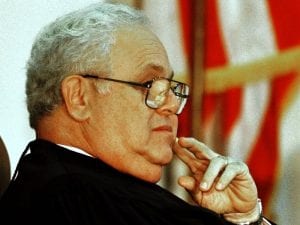 Gerald Kogan, a former Florida chief justice, came to see the death penalty system as beyond repair, something that must be abolished. He often said he believed Florida had executed three innocent people, but he took their names to his grave. (MARK FOLEY)

“The risk of executing an innocent person concerned him most. On the trip to Montgomery, he revealed that he believed innocent people had been executed in Florida. He had seen the system make terrible mistakes and as he told our interviewer, ‘You can’t bring back the dead and say, ‘I’m sorry.’'”

Full text:
Three years ago I had the honor of accompanying Gerald Kogan, former Chief Justice of the Florida Supreme Court, and his wife, Irene, on a trip to the Equal Justice Initiative’s National Memorial for Peace and Justice in Montgomery, Ala.

The museum illustrates the connection between slavery, lynchings, mass incarceration and the death penalty. The memorial is a sacred space for reflection, using art and sculptures to depict the racial terror and injustice in America.

During the trip to Alabama, 40 of us — including Justice Kogan — traveled together by bus. Our group included faith leaders, community leaders, lawyers, families of incarcerated people, exonerated Florida death-row survivors, and families of victims. We came together under common cause: ending Florida’s death penalty. Justice Kogan was all in, for personal and important reasons.

During our trip to Montgomery, Kogan gave a video interview to attorney and filmmaker Ted Corless. In the video, Kogan described how the system places a terrible burden on those charged with deciding who lives and who dies. Kogan often talked about what it was like to be the “last word” on a condemned person’s journey.

Watching that interview again recently, I was struck by how Kogan’s voice softened as he detailed how excruciating it was to participate in a process that ends in death. He spoke with great sadness of the times when he had serious doubts about a person’s guilt yet because of the way the system worked, he had no choice but to answer the governor’s call with the news that there was no stay of the execution. In Justice Kogan’s words, “It puts the whole thing on me. That’s not good.”

Kogan wasn’t always a death-penalty opponent. He began his career in 1960 as a state prosecutor, and led the Dade County prosecutor’s capital-crimes division throughout the ’60s, then represented defendants in murder cases for more than a decade. In 1987, Kogan was appointed to the Florida Supreme Court by Gov. Bob Martinez; he was chief justice from 1996 to 1998.

This direct experience with the death penalty led Justice Kogan to oppose capital punishment. He knew the tremendous burden that capital cases put not only on the judiciary, but on our state’s budget, draining resources that could be spent on services for victims of violent crime and their families or programs to address crime rates. He understood the complexity and human frailty of a system that ends with the taking of life. He knew the process was long and stressful for everyone, including victims’ families. He saw firsthand how the death penalty targets and ensnares the mentally ill, the poor, the traumatized — the most vulnerable among us.

The risk of executing an innocent person concerned him most. On the trip to Montgomery, he revealed that he believed innocent people had been executed in Florida. He had seen the system make terrible mistakes and as he told our interviewer, “You can’t bring back the dead and say, ‘I’m sorry.’”

The reality of the death penalty weighed heavily on our group that cold day in Montgomery. The memorial to the nation’s more than 4,000 victims of lynchings, represented by 800 engraved steel slabs hanging from the open-air ceiling, stirred something inside all of us.

With rain cascading down sculptures like tears, we were struck by the linked legacy of our violent past to contemporary criminal justice practices. We left with a renewed fire in our hearts to end capital punishment.

Sadly, Kogan passed away in March, but his mission to abolish the death penalty lives on. In his interview, Kogan expressed confidence that if Floridians saw the truth about the death penalty, they would reject it. He instructed us to “put this out in the open.” Justice Kogan, this one’s for you.