You are here: Home / Uncategorized / Why Mary Anne Fights to Abolish the Death Penalty

I am friends with several death row prisoners and I can attest to the fact that each one grew up in a home of relentless abuse, poverty,  and conflict. Two of these men have brain damage caused by severe beatings and drug abuse when they were young.

Recently, Clifford Williams became the 29th exonerated Florida Death Row survivor after serving 42 years in prison.  Sadly, there are more men facing the same unconstitutionally determined fate and I am heartbroken that Florida’s new governor  signed his first Death Warrant instead of calling for a moratorium on executions.

I call for an end to this barbaric, arbitrary, and unnecessary practice. I will continue working to abolish the death penalty for as long as I live, and I urge others to join me in the fight. 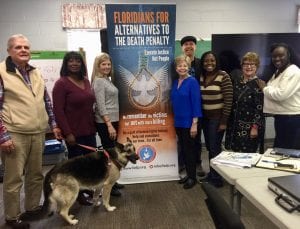 Mary Anne Hoffman is Chair of Tallahassee Citizens Against the Death Penalty and a Board Member of Floridians for Alternatives to the Death Penalty – FADP, the statewide Florida grassroots organization fighting for the abolition of the death penalty.